Each visitor to the Fizz Festival had an opportunity to vote for their favourites and the winner of the Lund Bennett sponsored award was:
Best Sparkling Wine UK: Sponsored by Lund Bennett
Winner: Hush Heath Balfour Rosé 2012

Hush Heath is a boutique, family owned English wine and cider producer based in Kent. Richard Balfour-Lynn planted the very first vines in 2002 with the ambition of growing premium quality grapes to enable them to produce world-class traditional method sparkling wine.

In the picture, Sharon Lund is seen presenting the award to Zoe Dearsley from Hush Heath. Hush Heath can be seen here:
http://www.hushheath.com 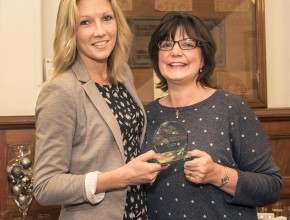 Following the issue of the Divorce Petition by the Court, the Divorce Petition is usually sent to the Respondent by post. In the event that the Respondent ignores the divorce papers, the Petitioner has to satisfy the Court that the papers have been received by their former spouse in order to progress to the Decree Nisi (the second stage) in the Divorce Proceedings. We outlined the options available to deal with issues commonly encountered in respect of service in our previous blog. See more at: http://bit.ly/2f6SvYr

Often clients do not want their spouse to know that a Divorce Petition has been issued straightaway and therefore seek to delay service of the papers upon their former spouse. The decision of Mr Justice Mostyn in the recent case of Thum v Thum provides some useful guidance on this issue.

In this case, the Wife issued a Divorce Petition in England on 26th October 2015 and made no attempt to serve the Husband until, on 19th January 2016 when she sent the papers to the relevant Court office for service out of the jurisdiction. A typographical error contained within the details of the husband’s address which caused effective service to be further delayed until 27th February 2016. On 27th February 2016, the Husband was served by personal service when he landed at Heathrow Airport. The Husband, by this time had already issued his own German Divorce Petition (in January 2016) and he applied to the Court as he considered that the Wife had failed to take proper steps to serve her petition and it should therefore be struck out. The Husband’s application was dismissed.

Mr Justice Mostyn noted, in his judgment, that there is no requirement to serve the Divorce petition ‘forthwith’ or ‘as soon as practicable’. The furthest Mr Justice Mostyn would go was to say that he would expect:

‘a requirement of acting reasonably promptly and that promptitude should be informed in a broad way by the (extendable) time limits in CPR 7.5’
The Civil Procedure Rules Mr Justice Mostyn refers to deal with the issue of a civil claim form which is to be served within 4 months from the date it was issued (if within this jurisdiction) and 6 months if service is to be effected overseas. A full copy of the judgment in Thum v Thum can be found at: http://bit.ly/2dS20su

Whilst a Divorce Petition can be issued and Divorce papers held on file, this should not be done indefinitely. As Mr Justice Mostyn outlines in his judgment above, Petitioners should act ‘reasonably promptly’ in serving a Divorce Petition, ideally within a few months (no more than 4 to 6 months).

Deciding where and when to issue Divorce proceedings may need to be carefully considered. At Lund Bennett Law we can advise you regarding your options, the impact of the same and act decisively for you when our assistance is needed. Please contact a member of our team for more advice today on 0161 927 3118.

Is Law Failing To Keep Up With Cohabiting Couples?

Family Law organisation, Resolution, claim that the law is failing to give cohabiting couples the same protection as married couples.

With cohabiting couples now the fastest growing family type in the past two decades according to Office for National Statistics figures, little has been done to protect couples who separate. When married couples separate there are well established laws to fall back on which can help couples move on while cohabiting couples are left without any rights.

3.3 million families in the UK are now classed as cohabiting couple families which is double what it was twenty years ago. This indicates a real shift in society’s attitudes to marriage. It is becoming increasingly clear that a significant proportion of the population are deciding that cohabitation offers a more flexible arrangement. However, when problems arise as they often do in relationships, it becomes all too easy to leave the relationship.

Many cohabiting couples mistakenly believe that they will be entitled to the same treatment as married couples when there are disputes only to find that there isn’t. The myth of the ‘common law marriage’ often catches many couples out when they decide to explore their legal options.

Brad Pitt is reported to be seeking joint custody of his children in what is likely to be a complex divorce case with actress wife Angelina Jolie. Shared custody even for a Hollywood couple is far from guaranteed to work unless certain rules are followed.

So how do you make joint custody work in the best interests of you, your ex, and your kids?

Try your best to cooperate
Cooperation can be difficult when feelings are running high in divorce cases, but you will need to convince yourself to take a step back and think of the bigger picture often. Good cooperation is essential to making any joint custody arrangement work.

Don’t criticise your ex in front of the kids
It’s all to easy to easy to say bad things about your ex if you feel that you are the wronged party but this will only work against you if you do it in front of the children. Try to keep feelings to yourself and find other healthier ways to vent your frustrations.

Think carefully about your schedule
It can be easy to get carried away with how much custody you want in the heat of the battle with your ex. But it is important to make sure your demands are realistic allowing you to balance your work commitments.

There are an increasing number of step-parents following separation who have difficulties in relation to contact with their step-children and their partner’s former spouse. The legal side of this issue can be quite complex, many parents are not aware of their legal position or what they can or cannot authorise when it comes to their step-children.

By way of example, a step-parent’s spouse is away for the weekend with one of the children and the other child is with the step-parent that weekend and needs urgent medical treatment. In that scenario, what that step-parent is allowed to consent to/authorise is dependent on whether or not they have Parental Responsibility.

A step-parent even if married to a parent of a child does not acquire Parental Responsibility for that child automatically in the eyes of the law. They must have the consent of both legal parents before they are entitled to make decisions for the child such as in the case of an emergency or in need of medical attention.

This is a highly emotional area of family law as it can take some time to build relationships following separation. A step-parent wanting to acquire parental responsibility can often be seen as a threat to another parent who may fear being ‘excluded’ from their child’s life. It is important that advice is sought before making any decision about who is involved in a child’s future. Consulting our specialist lawyers in our Altrincham or Manchester offices is a great first step. We can talk you through your options and help you to decide what is the best way to proceed. Please contact us on 0161 927 3118 today.